One of my sporting highlights this year included A footy tour to Melbourne with Levi's team, the Wembley Downs Cats to play a couple of junior league games and catch some AFL at the home of footy, the MCG!
The trip included a fantastic Saturday morning training session with the North Melbourne Kangaroos, the dream time match between Richmond and Essendon at the 'G', and lots of sight seeing around the streets of Australia;s coolest city.
The highlight of the tour was playing 2 thrilling matches with the Keon Park Football club and the Hampton Rovers. The boys came away with a 1-1 record but far more significant was the hospitality extended to us by both clubs.
As with all trips I tried to get some running in, so with a mild hangover one early, cold but very pleasant Melbourne morning, I managed to run Ethiad to the MCG. Turns out there is a beautiful river side dirt path a lot of the way between the 2 stadiums which tracks along the Yarra.
Although we had to sit through another Freo thrashing, the boys got to go out on to the MCG during half time and I got into a dust up with the Collingwood mascot...so that made our weekend complete.
P.S. All dads got the bed by 9pm every night. 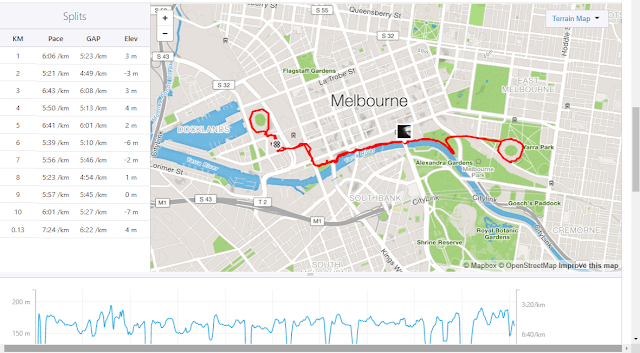