Shays team will play in the bronze medal match after losing 1 - 0 in dissapointing circumstances on Sunday.﻿﻿ 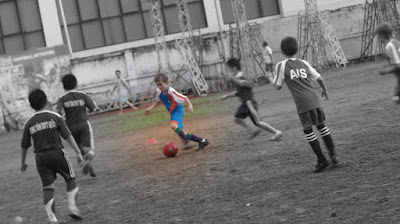 Trying to explain to the kids what happened this Sunday was very difficult. Losing is a part of the game and a part of life. But this was not that simple....
The game started with the AIS Roar not quite playing their best football of the tournament. Tia Sang had a number of corners and got close to goal on a few occasions. Tia Sang had a strong physical presence and weren’t afraid to pressure the AIS kids with their strength – definitely something we can learn from [and expect] in the future. However slowly and surely the AIS kids got themselves into the game and once Jude got his boot replacement (thanks to Lorne) the kids were starting to get much more of the ball. Zyle and Mike played great games in defense once again, and Shay and Jude were running hard in the mid field. Jake played his best game in the tournament and tried hard all day. But the forwards had limited opportunities and the Roar only threatened the goals once or twice in the first half.
Then – just before half time a substitution was made for a very tall Tia Sang striker.  The kid was on the ground only a few seconds before he took control of a lose corner kick in, side stepped an AIS player and blasted at goal from very close range. Oscar actually came close to saving it, and had he not suffered a boot in the head he may have held onto the ball.  The scorer immediately left the ground and as Oscar was being treated for his heavy knock, the Tia Sang substitute changed out of his kit and disappeared. This raised the suspicions of the AIS families and questions were asked of the player’s age and real name. After some intervention and discussion the game was allowed to resume. 1-0 to Tia Sang at half time.
Many teams would have given up here – Especially under such circumstances, but this team has never given up easily, and this was no exception. AIS came out with more determination than ever and played one of their best half’s of football of the tournament.  Poncho moved forward and terrorized the defense. Caitlyn suddenly had the ball on a string and weaved her magic toward goal. And Jude blasted what must be the best long range free kick attempt of the entire tournament. He was no less than 30m from goal - his shot beat the wall and only a finger tip parry by a desperate Tia Sang goalie saved the scores from going level. (“Maybe it was the magic boot” his mum later said.) Shay, Matt and Poncho all had more shots but no one could quite deliver the knock out blow.  Tia Sang rebounded and late in the game a powerful shot got through the defense. Oscar threw himself toward the curling shot – the ball rattled the goal post but once again it appeared Oscar had it covered, post or no post.
With a final few desperate minutes the Roar gave it everything but could not penetrate the Tia Sang defense. 1-0 to the final score.
on November 14, 2011

Email ThisBlogThis!Share to TwitterShare to FacebookShare to Pinterest
Labels: Football