A Runners Life in Kuala Lumpur

Finding ideal running routes in KL can be a real challenge. It is not exactly the most tourist or pedestrian friendly city. There are many positives to getting around, like the overhead LRT monorail, and the underground trains. And taxi and ride share is cheap.
On foot however, I discovered side walks are rarely continuous and pedestrian access is often poor or non-existent.  There is almost no bicycle lanes and given that KL drivers are a little aggressive and average speeds relatively high compared to some other Asian cities, riding or running on the roads is not recommended.
I eventually found a couple of nice city parks to run through and returned to them on a regular basis.
Taman Titiwangsa is located just north of the city and kampung Baru, just 1 block past Tun Rasak. Its a large park with a good path of about 3km around a lake. The views back to the city are inspiring and the park is at its best early morning or at dusk. It has lighting so can be safely navigated up to 10pm at night. The park can get a little crowded on weekends as families visit to walk or use the hire bikes.
From my apartment I would put together a 5 mile run, crossing Tun Rasak at an overhead walk way and completing 1 lap of the park.


Another run I did occaisonally was a down town circuit. Mainly through city streets and up to the famous and centrally located park space of Taman Ampang. Situated right in the middle of town, the park includes the impressive KL tower. The park does not have a path through it but you can climb the road to the base of the tower and get a view of the surrounding city. 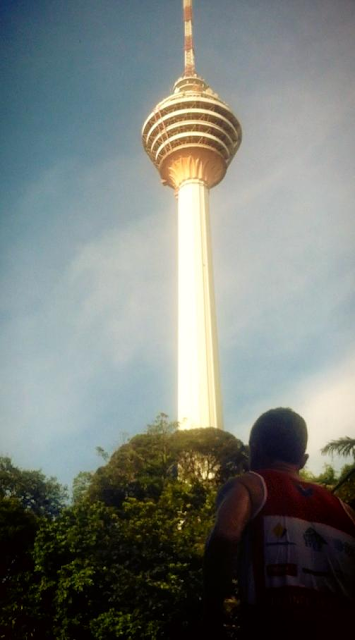